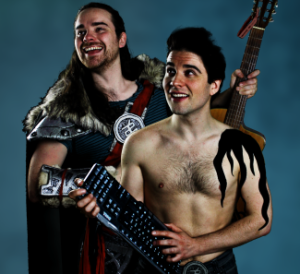 Jollyboat (brothers Ed and Tommy) have been kicking around the UK scene since 2010 with their musical comedy. Pirates of the Karaoke is a compilation show comprised of a set chosen by their fans (The Jollyboat Crew), making this the perfect introduction to the duo.

Starting out with a medley of popular songs rewritten with the pirate theme used in their advertising, you would probably expect similar songs for the rest of the hour. This was possibly the case in the early days, but they have clearly expanded their repertoire to include various nerdy pursuits (including Dungeons and Dragons, computers and Game Of Thrones) as well as more mainstream themes such as Jesus, love songs and X-Factor. They explain up top that if you’re not particularly geeky, you’ll probably enjoy half of the tunes at least.

With Ed handling guitar duties and Tommy providing running commentary about some of the lyrics, the boys play some funny toe tapping tunes. They may not have the angelic voices of other acts but they harmonise well enough to impress. Their bio has them employing the standard comedic duo traits to the act (the cute one vs the smart one) but when they’re just banging out the tunes for us, there is not really enough banter aside from a few cheeky remarks here and there.

The songs are often accompanied by PowerPoint slides with cute cartoons representing the songs. A couple of tunes use the screen to provide karaoke lyrics for the crowd to sing along and another uses clever keyboard symbols to point out the pun jokes. Unfortunately, due to the set up of the room, the screen isn’t clearly visible from behind the fourth row.

This afternoon Free Fringe show is the perfect aperitif for Jollyboat’s new show Why Do Nerds Suddenly Appear? later in the evening. Get out your hook and cutlass and have a hilarious rockin’ time.