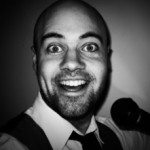 Xavier is one of those comedians who’s talent can make your jaw drop and your brain think, “why isn’t he more famous yet?” There are so many superb zany ideas, whacky characters and silly voices packed into his show that in other hands it might have been a bit messy but Xavier’s brain has not let him down.

Xavier has crafted an ingenious network of sketches, monologues, mime and even interpretive dance to map the many aspects we associate with the complex and mysterious brain. The membrane holding the show altogether is a fictional relationship Xavier has with his own brain and although there is much silliness and amusement in them chatting, bickering and splitting up to find new partners, it is this story that gives us a real insight into the brain of a working comedian and an idea of where the show’s concept may have originated.

Xavier’s sketches are all brain related, of course and if I have any faults to pick it would be that there are slightly awkward pauses between them where the audience was unsure about whether to clap and that their might have been a few too many characters for the audience’s poor brains to keep up with. Though Xavier does have a knack for picking the perfect comedy voices to go with his characters. The sketches include; the relationship between Emotions and Memory which were portrayed beautifully as characters in conflict, the inevitable psychiatrist and patient relationship and God and Gabriel discussing faith. A regular running gag is some sudden brain related commercials for products such as drugs to make your dreams continue or ‘celebrity brain snacks’.

A strong aspect of the show is blocks of straight standup comedy by Xavier which are attached to the main membrane of plot, but also inspires off shooting skits. These are conventionally funny and are exceptional examples of how the best comedians are able to slot their stand up gear into an interesting hour long festival show. In one of the skits, Xavier has written a call back that is so impressive that it receives a round of applause.

Xavier has been blessed with a comedian’s funny face and anyone who has seen his nutty TV adverts for this year’s Melbourne International Comedy Festival will agree that his face alone can make you laugh. This is beautifully combined with intelligent writing, perfect comic timing and superb character acting skills. He reminds me a little of a young Rowan Atkinson with loads of potential and a definite star on the rise. This is not a personal heart on sleeve show but it is a very entertaining look into the mind of a very funny guy.

Xavier Michelides – The Brain Whisperer in on at The Portland Hotel
http://www.comedyfestival.com.au/2012/season/shows/the-brain-whisperer-xavier-michelides-is/