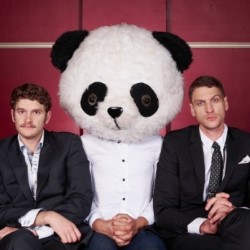 The Bear Pack are Sydney comedians Carlo Ritchie and Steen Raskopoulos, plus Ange Lavoipierre on the cello. Lavoipierre’s soundtrack becomes the backdrop to the improvised tale spun by improv masterminds Ritchie and Raskopoulos.

The Bear Pack create brilliant sketch performances, that captivate, while remaining completely improvised every night throughout their unique hour long ‘yarn’ style.
They only ask for a location and a word from the audience at the beginning of the show and then the riffing can begin.

Although, Ritchie and Raskopoulos are both strong solo performers in their own right, with Raskopoulos also performing his solo sketch show The Coolest Kid in Competitive Chess during the Fringe and Ritchie making his solo debut at the Melbourne International Comedy Festival with his show Cooking For No One earlier this year. The pair have undeniable chemistry while performing together. They almost appear to have a superpower that gets them into each other’s minds to know where their next move is, to help them stay on a similar wavelength and keep the show on track. However, it is the looser moments where they try to stitch each other up with an impromptu song or an accent belonging to any of the diverse sea of characters within any particular yarn, where you’re reminded that this is actually all off-the-cuff, which you can quickly forget while watching such an otherwise seamless performance.

Ritchie and Raskopoulos always seem to manage to tie the yarn neatly together by the end, showcasing their own natural talent and from years of working together since forming as the duo in 2012. However, if you’re still feeling unsettled, don’t stress. They’ve got you covered with a question and answer at the end to sort out any niggling queries you may have about any part of the epic storyline. So, what have you got to lose?

My tip to you is grab a ticket to The Bear Pack when they turn up again. You never know where it will lead you…well apart from improvised bliss.