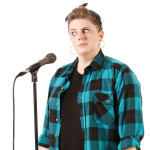 A Bok in Progress is not your usual work in progress show. While Lauren Bok is genuinely trying out new ideas, this is a work in progress about being a work in progress. Students of the comedic arts will find plenty of giggles, nay guffaws, as she pokes fun at the creative process and the obstacles put before performers. It’s not all inside jokes as the normals will delight in Bok’s relatable material.

There are some clever ideas in this performance. She starts the show with a clean slate and builds upon it with the audience’s help. Those who normally run a mile from audience participation needn’t fear, most of the tasks are administration, holding various props and reacting to ideas. We are taken through the basic building blocks of creating a festival show. We wade our way through a huge list of pun show titles, see a “scientifically generated” blurb and image, see how intro music sets the stage for various types of comedian and hear a personal story about her creative process.

The moments of pure silliness provided the most hilarity as Bok showed off her wonderful physical comedy chops. Her numerous props gave things a touch of whimsy while she pushed some ideas to ridiculous extremes with great results. A serious monologue towards the end was a severe change of pace and mood but fit in perfectly. Thankfully it was broken up with a witty joke about show structure and audience behaviour that was wacky enough for all to enjoy.

While she is given some leeway with this being advertised as a work in progress, not all of the jokes land. Getting the crowd to vocalise a rhythm while drumming the beat was a messy way to start, even with it’s cute pay-off. The blurb generated by algorithm was so long and nonsensical that it evoked bewilderment rather than laughs. These interesting ideas are sure to be licked into shape in the future and Melbourne Fringe is the perfect place to try them out. There are enough laughs here already to satisfy and this has got to be one of the shows that embraces the spirit of the Fringe.