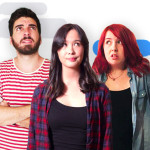 I’m Here is the second Fringe outing from the collective Hit By A Blimp (Caitlyn Staples, Jayden Masciulli and Tiana Hogben), this time exploring the intricacies and minefields of social interactions. Through sketches and musical numbers, we see awkward small talk between two strangers narrated through song, all the possible reasons why your crush hasn’t answered your messages, a third wheel overdoing it trying to join an activity and creative ways to exit a dull situation.

The trio bounced off each other effortlessly and brought their individual talents to the table. Hogben was the strongest singer while the others endeared with their exaggerated performances and interpretive dance. Masciulli sold his comedic anxiety well and along with Hogben acted as straight people to Staples’ wonderful hammy wackiness.

There were plenty of brilliant ideas in this show but in terms of strength of sketches, it was a mixed bag. Some scenes used extensive props for nothing more than lukewarm punchlines. Others were strong concepts that petered out at the end. When they did manage to pair the brilliant ideas with enough hilarious material to fill the sketch, they had me and the rest of the audience laughing heartily.

The way each scene interconnected with the others was a little confusing at times, often with only a throwaway line later on to connect the dots. Minimal costuming meant that many characters seemed so interchangable that you didn’t realise they were different until several lines in. Some sketches seemed to be out of place amongst all the sketches set at parties and with recurring 20 something characters even though they stuck to the theme. With their strange settings and characters, it was these scenes that really stood out and impressed. You’ll certainly never see marine buoys or your food deliverer the same way again!

This show was a fun hour of sketch. Despite the patchiness of some of the jokes, there were plenty of laughs to keep the audience chuckling throughout.