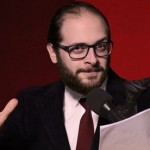 Ben Volchok has been around the comedy traps for a few years now, doing his own style of fairly intellectual stand up using silly, spurious concepts and mind tickling word play. His last two solo shows have shown how creative he can be with his material. Now he has focused his skills into a format that suits them beautifully, radio plays.

I’ve been to a few live radio plays over the years, but not one performed by a solo comedian before. Ben does a multitude of silly character voices brilliantly, male and female and is able to create elaborate tales that keep the audience engaged and laughing throughout. He even inserts the sound effects, with the brilliantly simple aide of a laptop beside him. The tech goes near perfectly (he does also have some tech help on hand) but if it didn’t it wouldn’t matter because the show is written so well that it would work just as well, though the sound effects do add panache and the odd laugh.

Ben performs two different radio plays and he has arranged them cleverly, with the more densely worded and complex Mysteries of an Uncanny Nature being performed first when audience concentration is at its peak. The episode was called The Case of the Satanists and the Disappearing Buttocks featuring supernatural detective and spoonerist Errol Street on the tail of a missing girl. Bodies pile up, twists pop up and Satan turns up. The similarities to The Goon Show are noticeable here. I loved The Goon Show in my teens but gosh this reminded me how much you had to concentrate to keep up with what was going on! It can be difficult to laugh because you might miss the next joke. Ben’s jokes come at the audience as thick and fast as the murders in his story. The second radio play Pru Blue: Outback Spy Hunter is a lot less dense and thus has bigger spaces for the laughs to fall, thus it is also a bit more relaxing for the audience. This was set in late 60s/early 70s Australia at a time of Women’s Lib and the photocopier becoming widely available. Pru has to foil some nasty counterfeiters.

Ben Volchok Presents…opens with Ben being the radio DJ rocking out to some radio themed music which was a rather lovely way to welcome the audience into the space. It’s another character he has created and stays in this DJ character when not playing characters in the plays. To add some extra colour Ben does some radio adverts, including a little impro where he lets the audience pick the product and he makes up an ad for it on the spot.

Ben is a brilliant comedy writer and a truly unique comedy voice who is always entertaining. I love how he works hard to give his audience a great time and is able to calmly deal with rare mishaps and surprise us by engaging with the audience outside of the script for a laugh. Importantly, his skills improve with every festival and though for this show, Ben is inspired by his comedy heroes, as all great comedians are, Ben has his own style that is emerging beautifully. Ben Volchok Presents… is a joyful celebration of the radio play with a couple of captivating adventures that are definitely worth the journey.