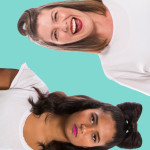 Wanda and Mel is a backstage musical of sorts, a Mother/Daughter cabaret act doing a tour of regional towns of Victoria with some drama and a lot of laughs. A generation gap story about a new generation.

Amanda Buckley has been performing around Melbourne’s comedy and improv scene for a long while and is well cast as the stage mother, Wanda. She not the usual stage mother monster as portrayed in Gypsy but more sympathetic as a well-meaning woman who has had her own burgeoning career thwarted by circumstances and now in middle age is giving it another go with her talented daughter along as a side kick. Wanda is so full of energy and positivity that it makes the audience laugh and is fairly infectious. But we can also see that it could be exhausting and embarrassing for a teen.

The incredibly talented but properly socially awkward Mel is played beautifully by Kaliya Arumugam. Her job is to embody the laconic, millennial, phone obsessed teen offstage while singing and dancing her butt off onstage. Mel probably looked up to and adored her mum as a kid, wanting to be like her but now in her teens is sick of wandering with her mum and trying to discover herself and what she wants to do with her own future.

The songs are all famous tunes with new, comedic lyrics written all about current hot topics like climate change, marriage equality and Misogyny. It’s a pity that the music isn’t all fresh and original, but this is just the sort of thing that might be performed in regional schools by a cabaret/musical comedy act. They are all very funny (and not in an ironic way) and the choreography is particularly impressive and well executed. Some of the songs less so, particularly when they require the lower register which neither performer was able to master, maybe a musical retooling of these bits or even taking out one of the songs may have helped (one particular deep one didn’t seem important to the show). There were some glitches on opening night but these were mostly dealt with beautifully with much humour and Amanda’s impro experience coming to the fore turned them into show highlights.

Wanda and Mel is well acted and well danced with a lot of enthusiasm and packs in some timely political messages in an easily digestible way. This is a fairly sweet and funny bit of musical theatre you can bring the whole family to. I could see this actually going over well in regional towns. It’s a bit daggy and old fashioned, but like Wanda herself it is also well meaning, positive and joyous.