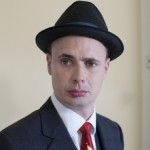 Is my life interesting enough to talk about for an hour? This is the question at the center of Asher Treleaven’s Troubadour, the fifth in his continuing series of door-named shows. Luckily for the audience, the answer is a resounding yes. Treleaven delights with stories of growing up with a chaotic assortment of father figures and spending his formative years working as a carnie. His comedy is a seamless blend of the cerebral and the physical, as he waxed lyrical about the nature of masculinity while flouncing about the stage, limbs flailing.

The show opens with a simple explanation of the show’s premise, and it is made clear that Treleaven’s question is not rhetorical. The decision is yours to make. At the end of the show, the audience must pass judgment on the interestingness of Treleaven’s life. But there’s no need to worry! Treleaven helps you answer this question by working through Edward De Bono’s six thinking hats – a problem solving system many of us are all too familiar with from tedious hat-colouring sessions at work or school. The six hats are a constant guiding presence at the back of the stage, including a truly spectacular replica of Princess Beatrice’s pink monstrosity standing in as the red hat – a brilliant investment on Treleaven’s part.

The audience loved every moment of the show, and Treleaven fed off this. One gentleman in the front row was particularly tickled by the image of a person marrying a horse, which led to some great ad-libbing about Bob Katter in the Harry Potter universe. Treleaven’s performing arts background really shines through. He expertly held the attention of every person in the tiny sauna that is the Town Hall Cloak Room, not to mention that his circus training has provided him with a spectacular university graduation piece.

Despite Treleaven’s (entirely accurate) statements about comedians being cynical at heart, Troubadour is an incredibly uplifting show. It tells a story of self-acceptance without being preachy and feels remarkably positive without being saccharine. And it is hilarious. If you’ve yet to see one of  Treleaven’s shows, get yourself to this one.

Asher Treleaven – Troubadour is on at the Melbourne Town Hall in the Cloak Room.