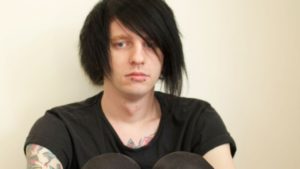 Emo walks a fine line between comedy and tragedy. Andrew Hasting’s comedic material covers plenty of heavy topics and is pitch black which, though appropriate for his persona, is often a difficult sell when the audience are not on the same wavelength.

The comedy is broken up with some serious segments where he tells us the plain facts from his life set to some backing music. While clearly this is a device to generate some light and dark, the problem is that these facts are usually the basis of the comedy material he has just been selling us for the last ten minutes and he offers little distinction between the two. The audience has a difficult time working out where to laugh or cry and Hasting’s heavy use of self-deprecation complicates things so he struggles to even generate nervous titters. When he does manage to get the balance right he gives us some fantastic witty lines and a bit of clever wordplay but these were a little light on the ground for this opening night.

If you’re a fan of sexual talk, Hastings has got you covered. He warns us of his tendency towards graphic filth but the material isn’t too on the nose. These routines cover some unique viewpoints that are quite funny when he doesn’t use his self-loathing as a punchline.

Hastings has a charming stage persona that is a far cry from his subject matter. He is happy to engage with the audience both to advance his story and, depending on how vocal the punters are, gently poke fun at the responses he gets.

I’m clearly not the target audience for this show covering youth depression, having left youth behind long ago and being lucky enough to never have experienced depression. Perhaps other survivors who can relate closely to his views will find his form of gallows humour funnier than I. This is a bold performance that gradually reveals the dark thoughts of this Emo but is unfortunately a little too guarded to allow everyone to laugh along with him.

Emo is on at Speakeasy HQ until April 10
https://www.comedyfestival.com.au/2018/shows/emo