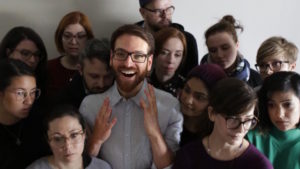 Canadian standup comedian Asaf Gerchaf has lived in many cities in the world, including Melbourne at one point, but he’s not been here for a few years and it’s great to see him again. He’s been going through a rough time, but you have to read between the lines to realise it.

Asaf’s style is less breezy, cheery, charm and more bullet train cheery charm. He’s loud (which can be important when there are musical comedy acts in the venues on either side) and fast, so keep up. This is not a relaxed rough round the edges type, late night act, this is carefully constructed storytelling comedy.

Early on Asaf tries to suggest that Canadians are not as nice as their preceding reputation and then throughout the show goes on to completely refute this by describing the lovely relationship he has with his arts loving family, how much he likes public transport because he sees how beneficial it is to society and in his refusal to go into any detail about the break up that has left him lonely and Sleepless in Toronto.

Big cities don’t normally make him feel isolated, but a broken relationship and new friends who don’t know him well enough to help have left him suddenly emotionally isolated. Asaf is determined not to wallow, but it would be nice if he shared a bit more about his feelings. Maybe it’s too soon to joke about it. The section on politics is not the strongest part, but again shows how nice Asaf is, that he can see from the other point of view. We learn a bit about his family but very little about the inner workings of Asaf, except that he is trying to stay positive and avoid the clichés.

There is a warm up act for some reason; tonight’s is Nick Quon who, in complete contrast to Asaf, mostly did some relaxed crowd work, and was pleasant, but not up to Asaf’s level of experience. I always say, a festival show that runs a bit short is always superior to a festival show that runs long, especially late at night. So a warm up act to fill time is not necessary but I guess it can be a good way for audiences to get a taste of other comedians at the festival. I’m sure Asak has over an hour’s worth of material but it speeds out at such a mighty pace, that he has room for Nick to open.

If you are looking for some friendly, storytelling comedy later in the evening (earlier on Mondays) without props, audience participation or a single dick in it, Asaf Gerchak is a pretty good choice.

The Only Happy Man in Sadtown is on at The Imperial Hotel until April 22
https://www.comedyfestival.com.au/2018/shows/the-only-happy-man-in-sadtown