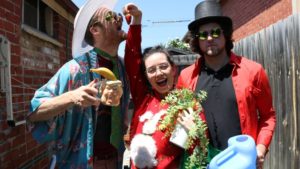 AJ Steele, Scott Collins and Aisling McGrogan are a young trio of aspiring actors who have formed the sketch group Madison’s Square Garden. Their debut effort had the feel of chums performing to their extended circle of friends. While their mates could find plenty of humour in seeing them act silly, complete strangers may struggle to find adequate laughs beyond that.

All the performances were suitably broad to sell these wacky scenarios with each playing to their strengths; Collins played downtrodden losers with a mousey voice and sunken posture, McGrogan inhabited the brash characters with wild eyed abandon while Steele was a good all-rounder. They got quite a bit of comedic mileage out of gender swapping and popped on small bits of costuming to flesh out their roles. While they could pull off exaggerated acting well enough, a woeful and overlong musical number had the audience wondering whether they were being inept at musical theatre deliberately.

Material-wise this show was rough around the edges. Not many of the sketches landed strong punchlines and even when they did, they continued way past their natural end. A great many sketches explored that dusty old trope of the differences between men and women which used some gender bending and a bit of hammy facial expressions to get laughs. There were a couple of truly inspired sketches that managed to combine all the right elements (their TV dating show was especially clever, layered and had some twists to keep things comically interesting) but they also suffered from sloppy conclusions. The Animal House styled end to the show was a nice touch and had us leaving the theatre smiling.

Being unable to control the stage lights to fade out each sketch, they sometimes compensated by throwing in some dialogue to transition to the next. Even without this device, it left the audience in the strange situation of not being able to anticipate the exact end of the sketch and applaud. By the time they did realise, it was a little too late so they didn’t bother until the end of the show. A sketch performance without regular applause between scenes just seems wrong.

Madison’s Square Garden is on at Long Play until April 6
https://www.comedyfestival.com.au/2018/shows/madison-s-square-garden-1