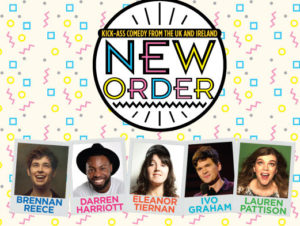 There are many group shows at MICF, they are a great way of getting to know a group of comedians in a short amount of time and deciding who you might like to see more of in the future. You might even become a fan.

What a fantastic way to start the lineup. Lauren Pattinson is so bright, perky and wildly talented, she was nominated for Best Newcomer at The Edinburgh Fringe Festival Comedy Awards last year. It’s a bit of a shame that she’s not brought her full show Lady Muck to Melbourne which was so loved by our writer Ron, as well as most other people who saw it. Here we get a taste of it, Newcastle Girl alone and full of self-doubt in the Big City of London. Her main story concerns a hangover and finding comfort from strangers. Lauren was the highlight of my evening and I look forward to her bringing a full show to Melbourne one day.

Very young looking Ivo Graham has actually been doing comedy for almost ten years. He began at 18 and won Best Newcomer not long after. This is not his first trip to Australia, either, though he was not here for comedy. Ivo happily went to school in Sydney for 3 whole years as a child before being dragged back to Old Blighty to attend Eton, the most prestigious private school in England. He was able to keep some of the notorious bullying at bay with his knowledge about Neighbours. Unsurprisingly he is an intelligent comedian and has chosen his material for the Melbourne International Comedy Festival well. After introducing himself and background, the body of his set was one lovely long story about going on family holidays and it was a treat. Ivo, has the instinct of a brilliant comedian and having almost finished the usual ten years apprenticeship is on his way to becoming a household name.

Eleanor Tiernan (yes she is related to Tommy Tiernan, she’s his cousin) took up comedy latish in life. There is a sense that she knows she must prove herself to her family and friends back home and her talent should see her well there. She’s moved to London and is fairly outspoken about the backward treatment of women in Ireland and also has some very funny  share-house stories to impart. Eleanor is mature, strong, opinionated and also a pretty experienced comedian, so adding her to a ‘New Order’ line up seems a bit odd but this is less about newcomers and more about who is about to become a household name and Eleanor is certainly well suited to this really strong line-up.

Darren Harriott has some more, somewhat hairier share-house tales to tell, and unsurprisingly he tells them well with many laughs. Darren has the roughest background and is able to make light of it with confidence and charm. Not surprising that he was also nominated last year for Best Newcomer at The Edinburgh Fringe Festival Comedy Awards and is well on his way to a stellar career.

If there was a theme that brings these four acts together it’s single life in the big city of London, the other is that they are all very talented comedians. For me Laura was the standout and I’ll definitely be hoping to see her again, but they were all really good. New Order is definitely one of the strongest line up shows I’ve seen at Melbourne International comedy and is definitely recommended to pop on your Festival list.

New Order is on at The Melbourne Town Hall