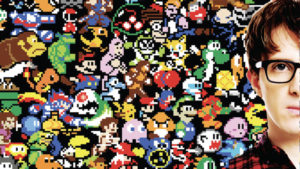 I went into Game Face expecting a show about computer games. It wasn’t really, though it did mention an old computer console game at one point. It was more about Email scams and pranks for which he is apparently famous, and I guess they are games of a sort played on a computer. His style certainly appeals to some geeky males I know and the audience was packed with fans, because James is somewhat of a You Tube star via a couple of famous TED talks and a spot on Conan about rubber ducks.

James’ deadpan but cheeky style is reminiscent of Dave Gorman. Power point presentations and tales that get laughs from surprise, audacity and tenacity, though these are not quite as slick or as gob smacking as Dave’s intricate adventures. There was a lot of faffing about at the beginning of the show that was starting half an hour late (not really his fault that the previous show went over, but Get On With It!) and rather than nutty and daring, I found his stories amusing but rather petty. I kept sympathising with the person on the low wage he was teasing. In the past he’s apparently gone after proper dodgy scammers, but in this show it is low grade annoying advertisers, medical assistants and someone on the British equivalent of Gumtree that James is quite clearly hoping to lure in to toy with and use for his comedy festival show / next viral video. It was about a Flux Capacitor from Back to the Future, so he seemed to be deliberately trying to hook a geek, who might be sympathetic and not threaten him with the police, I guess.

James’ show had laughs throughout, but it wasn’t completely hilarious, maybe a lot of people in the audience had heard it all before, as at least one major sketch he did has been online for two years. Basically this show is a way to enjoy someone dealing with some of the things that annoy you about living in the computer age and live vicariously through his meek revenge. James is not overtly cruel and so the fun is all pretty light. I can’t help but question the validity of his tales because unlike the meticulous Dave Gorman he provides no proof and, from what I’ve seen since online, he changes his stories a bit to suit his audience. In the end, though it’s all just a bit of silly  fun.

Things wind up with a song on the guitar that has been sitting on stage throughout, and a video of his friend’s housebound cat whose thoughts he voices over in the style of that other you tube sensation Henry the cat with Ennui. Cat videos are always a crowd pleaser and I was glad I’d stayed around for it. James is very charming and there were many laughs to be had, this would be a great show for geeky teenagers (if you don’t mind that there was a bit of rude stuff at one point) and people who love online pranking.