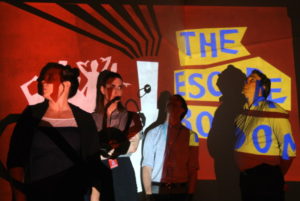 Watching the dysfunctional IT team of a tech company attempt to navigate an escape room doesn’t sound like a ripe premise for a comedy show. Throwing in a reluctant participant from Human Resources sounds like an actively un-ripening choice. But fear not the taste of the fruits of directing team Alex Chilton and Daphne Do. The Escape Room is a delicately crafted, thought-provoking and hilarious show.

The humour of this show rests evenly on its four key performers (Edward Chalmers, Shane Henry, Jenni Townsend and Alexis Watt) as it is partially improvised. Each embodies a typical character you might find in an office, and plays the flaws and foibles of these archetypes to perfection. I heard fellow audience members guffaw aloud at particular phrases; Watt’s spiel on ‘managing styles’ and the benefits of maintaining your LinkedIn profile clearly resonated with the audience on the night I attended.

I found myself in the entirely foreign position of lamenting my lack of a nine to five, and all the inane office politics that accompanies it; because I feel like the show and its jokes would have landed more strongly with that context. All the same the inherent tragedy of these characters transcends the minutiae of the setting; and lends itself to a universal comedy. Chalmers awkwardly negotiating conversation with HR’s Watt, Henry’s barely veiled disgust at working for someone he feels more qualified than, or an earnest Townsend diligently trying to solve the puzzles in time despite the chaos erupting around her; it all smacks of a humour we begrudgingly recognise from our own lives. It’s almost too real.

In keeping with that, the shows set pieces and escape room puzzles are similarly realistic. The Egyptian themed escape room hosts puzzles of complex intricacy. If Chilton and Do ever decide to leave comedy, the escape room industry would benefit. However the most honest piece of the escape room puzzle is Brian, played by David Todman, who runs at The Escape Room and is the kind of person that boasts “We don’t do handshakes here, only high-fives”. The wry tone that floods his voice bears all the sarcasm of a beleaguered someone who works somewhere people come to have fun.

This show is a satisfying slow burn, one which may lean too heavily on its audience having a similar experience; but then forced “team building exercises” with colleagues is a pretty common occurrence. The performances by the cast are impeccable and the way these improvisers bounce off one another as the situation in the room intensifies is very engaging. But walking away from The Escape Room, I was struck mostly by the comic tragedy of the characters Chilton and Do created. The innate comedy of careworn people just trying to get by, juxtaposed with unrelenting office politics and a fear of getting it wrong drives the show.

The Escape Room is very funny and intriguing; a high-concept adhered to with honourable fidelity, but the weight of this show rests on its nerve to cut so close to the bone.