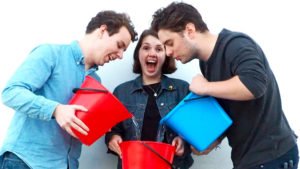 If your nightmares are haunted by the sound of an office clock ticking then this sketch show, centred on the strange flights of fancy we take while bored at work, might be for you. Leaky Bucket is made up of Prue Blake, Darcy Fleming and Matthew McCartney, three talented performers with a background in improvised comedy, who perform absurd sketches about passing time at the office.

As an aside, their improviser’s skills were well utilised on the night I attended after an errant slip by McCartney smashed a mug; a vital prop for a number of sketches to follow, and the performers had to subsequently work around this. It is one of the joys of live performance that I can be certain that no other show was exactly like the one I saw.

The breakage occurred in a sketch featuring an elf-cum-accountant who worked from Santa’s basement for twenty six hundred years. McCartney played gleefully perhaps the saddest character ever written, giggling under the jingling of a bell-touting elf hat.

A sketch about office cowboys, taunting each other over the acquisition and thereafter use of a ‘favourite mug’ was performed with enviable commitment and rewarded with laughter. In fact commitment across the board was high, no matter how absurd a sketch became, or how high the stakes escalated (to the point of murder in a few cases) these dynamic performers would commit to whichever physicality or voice the scene demanded.

The show was punctuated by commentary from the “Voice” who would critique or demand sketches from the trio. Pavan Dutta, who ran the technical aspect of the show, provided the voice and helped the show progress with his interjections, although at times the device felt somewhat forced.

Not for the first time this festival I came to realise that not holding down a ‘regular’ office type job means I am missing out on a whole world of office related banter, drama and vocabulary. Swings at Dusk does rely heavily on its audience to recognise the situation to facilitate the comedy and not being able to identify with each premise could alienate some pundits.

The comradery between these performers is charming, and for office bound workers inclined to daydream or procrastinate, this sketch show will entertain.

Swings at Dusk is playing at 7pm at Tasma Terrace until April 8th.