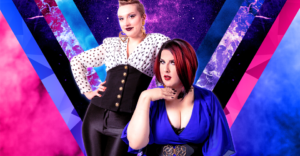 Somehow, I’ve managed to see a lot more straight male comedy at this year’s Melbourne International Comedy Festival than I usually do. Not that there’s anything wrong with that, but it was like a cool drink of water on a hot day for me to experience Almost Lesbians at the Imperial Hotel. The delightful double act of Sophie Joske and Anna Piper Scott are here to share their stories, have a lot of fun with gendered politics and more importantly make you laugh.

The comedy duo of Sophie and Anna hail from Perth and have a fantastic best friend type rapport. They make a great double act of Anna as sarky straight man /woman, (Goodness, we need another less gendered term for this!) and Sophie as the wacky 2nd Banana constantly in danger of taking the show off the rails. Of course there’s a place in the show where these roles become reversed, proving that comedy like sexuality can be creatively fluid. The girls have thrown everything at this, costumes, wigs, characters, singing, dance, drag show inspired lip-synching, audio visual gags and all of it actually runs very smoothly.

Almost Lesbians is an early show with a late night vibe. They do a great job creating a gay nightclub atmosphere and show how the intrusion of even well-meaning straight people into this world can sometimes be annoying to downright offensive. The impression of a drunk cis straight young woman in a gay bar was one of the funniest I’ve seen.

There is a dark underbelly to Almost Lesbians, but never too dark, often it’s just downright silly and has a sweet and warm heart. This isn’t the most polished show in the Festival and could probably do with a bit of editing, but sometimes a show that’s a bit rough around the edges can be a refreshing experience, like it’s performers. Sophie and Anna are fairly new on the scene and I hope to see a lot more of them in the future.

Almost Lesbians is on at The Imperial until April 8