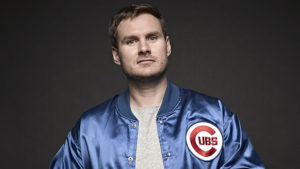 Most comedians wouldn’t start their show referencing philosopher Friedrich Nietzsche, would they? Well, Damien Power did. Has the decline in belief in God, as Nietzsche predicted, rendered humankind hedonistic, selfish and frivolous? Power doesn’t give us his unequivocal opinion on the matter, although we sense he’s not all that optimistic about our future. For him, we seem far more interested in eating chia pudding and avocado toast, deriding the people of Frankston, and correcting others language choices than solving the important issues of our times.

Power is a regional Queensland native, who’s been on the comedy scene for 13 years. “It’s a long time, I’ve gotta shake things up every now and then,” Power tells us, after having made a rather risqué joke. Before this show, I’d only ever seen Power satirising the far-right in the “True Australian Patriots” videos, alongside fellow comics Anne Edmonds and Greg Larsen. Admittedly, it’s quite easy to mock and deride far-right proponents in this country. Often, they do the job themselves, without the need for comedians. But Power, Edmonds and Larsen capture so perfectly the idiocy and ridiculousness of these personalities that the videos are required viewing for any comedy nut. In short, they’re inspired, and more potent than any politician’s speech denouncing such ideologies.

Violent Chaos Anyone? won’t disappoint, whether you’re a Damien Power follower or not. Power is an incredibly versatile comedian with a wide range of life experience behind him to inform the show: he moves between the low-brow and the high-brow, the meaningless and the meaningful, and the personal and the global. His brand of comedy is hard to succinctly define, but Power – like the late ‘60s Jack Nicholson – is probably best described as a “blue-collar intellectual”. Much of his show is dedicated to lambasting the bourgeoisie, for their faux politeness and their comfortable do-nothing lifestyles. Power’s also comfortable ripping into the lower-classes. His impersonations of the stereotypical “bogan” are startlingly accurate, making us think he’s seen more than a few in his lifetime. Maybe he’s even been one. Almost everything in the show is critical of something, and this means his jokes carry a social or political meaning that encourages us to think, to question the status quo of things.

For people resistant to changing their views or perspectives, Power is not the comedian for you. He’s a boundary-pusher, who’s not afraid to challenge or demand something of audiences. This is, in my opinion, the most rewarding kind of comedy; the most stimulating and humorous. Power is one of the best in Australia at this particular style, up there with heavyweights like Steve Hughes and Jim Jefferies. The difference between good and great comedians is quite small. But in a paradoxical sense, it’s difficult to elevate oneself into the latter category. It takes years of adjustment, refinement and assuredness for a comedian to transform herself/himself from a perfectly funny comedian to a genuinely great one. I think Damien Power has done it. Let’s hope in 30 years he’s still complaining about the longevity of his career on stage (“God I’m sick of getting up here to entertain a bunch of half-wits, I’ve been doing this for 43 years”). We wouldn’t be tired of him even then.

Violent Chaos Anyone? is on at ACMI – Cube until April 22.
https://www.comedyfestival.com.au/2018/shows/damien-power-violent-chaos-anyone