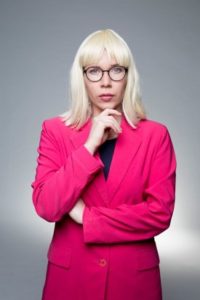 EMPOWERFUL is the second outing for Tantau’s motivational comic creation Cindy Salmon who stares with intensity, under platinum bangs and shouts positive reinforcements at all the ladies and “hatstands” in the room. Donning her trademark pink power blazer and drawling New Jersey accent Cindy takes her audience through the steps required to empower yourself.

Those averse to the sound of an air-horn should probably avoid this show. But everyone else should make a point to experience Cindy Salmon’s “Salmonar” to get a hefty dose of empowerment, and a hefty dose of expertly crafted character comedy to boot. Hayley Tantau has devised a hilarious character and the perfect platform to display her, and this year she is aided by a Moosehead Award grant.

Cindy’s first lesson, to Empower Your Day, will change the way you think about your morning routine and also change your opinion that comedy is not an athletic pursuit. The “Salmonar” continues, with Cindy sharing her tips on how to “GET YOURS”.

Tantau slowly peels away the layers of this brash and bawdy character; with one particular section where Cindy shows off her artwork causing some people to double over in their seats. Similarly an exercise where she collects fears written down by the audience reveals a fearful unassured woman underneath all that snappy bravado.

Tantau’s characterisation of a self-help or motivational guru captures the delicate balance of well-intentioned goodwill and veiled narcissism of the entire paradigm. Her creation in Cindy Salmon is so endearingly likeable and evidently flawed. A trip down memory lane veers this character into the absurd, as does the interjections of self-promoting advertisements that break up the “Salmonar”. Tantau’s performance walks the fine line between bizarre and grounded with high-energy finesse.

The Cindy Salmon EMPOWERFUL “Salmonar” is a masterclass in character comedy. For a laugh out loud experience and it is that, an experience, don your steel capped combat boots and go see this show.

Cindy Salmon – EMPOWERFUL plays at the Games Room at ACMI until April 22nd.