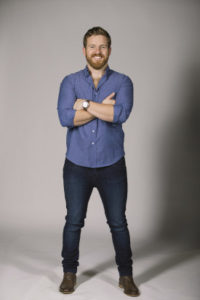 If you are looking for some straight up and down stand up to take your mates to, step right up. Do you love Beer, sports and pranks? So does Nick and he’s good at comedy.

I laughed all the way through Nick’s show. Not double over, crying, but enjoying it more than some of the couples around me who I didn’t see laugh once, though they appeared to be enjoying themselves. It’s a pretty mainstream audience for a pretty conventional show. There’s a bit of language and a LOT about excrement, but this is conservative comedy at its most charming and accessible.

I don’t often mention house music, but Nick makes sure that we know he picked it, ‘cause he loves it. I always find it mildly embarrassing when white suburban young men love rap about “bitches, bitches, bitches”. I have no idea who the artist is (so many raps about bitches eh?) but it is pretty off putting for me to say the least (it’s like a sign on a boys clubhouse saying “No Girls Allowed”). On one hand it’s jarring and contrary to Nick’s friendly, relaxed persona, on the other an unsurprising cliché.

Like the house music both going in and out, everything about Loose Unit is thoughtfully planned and well-constructed. Not much about the show is loose, though some of the funniest moments were a couple of interactions with the audience. The material is mostly biographical, about pranks with his wife, his new dog (a Staffy…surprise surprise), hanging out with mates and hating uptight nerds and guys with long hair…. Wait a minute…Very little phases me these days but it’s amazing how riled up I became about this, especially Nick’s hatred of men with long hair. Is Nick from the 1950s? Did we not sort this bullshit prejudice out in the 60s and 70s? Or is this what private school is doing to kids these days?

Nick seems to be in a bit of denial about the fact that he is anything but a loose unit; married and trying for a family, dog owning, doing good deeds (performing to the troops), starting to enjoy country music and performing convivial, carefully crafted standup comedy. He’s clearly on his way to a career in TV or radio.