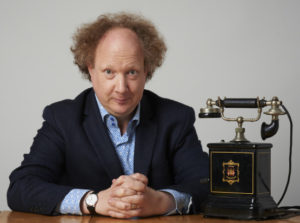 Andy Zaltzman is a master of observational comedy driven by politics, current events and of course his favourite topic – cricket. A multi-layered performance, referencing the obscure, engaging with the audience and presenting sharp political humour in an absurd and sometimes bizarre way. Right Question, Wrong Answer starts with a mock quiz to introduce the premise of the world delivering the wrong answer when asked an important question, it ends in a conversation with a friendly robot. In between and interweaved with the technical props and set pieces are observations, one liners and word play that ensure the show operates spectacularly on all levels.

Andy’s approach to comedy is so intricately researched and designed that it isn’t possible for any audience member to understand every reference and that’s exactly as designed. The show is wonderfully intelligent while remaining accessible to anyone, even if they only have the most glancing interest in world events. Right Question, Wrong Answer is a show with a global reach, with topics ranging from Brexit, Australian immigration and naturally Donald Trump, it explores the idea of nationhood and what it means to be British. This show will naturally appeal to those who like their comedy satirical and topical, but there is enough depth for it to be enjoyable to all.

Andy is clearly adding material all the time based on what’s happening in the world. He said a couple of times that a bit was new that night and it is a joy to see him enjoy the audience reaction for the first time. The only struggle for Andy with this show is the allotted time, there is far more material than there is time and at this point in the run he’s still determining what should be in the 1-hour slot and what should be left for the director’s cut. This show will evolve over its run which makes it a rare show that may justify multiple viewings to witness the evolution.

It was a pleasure to see a master of his craft at work, and while tonight’s performance was not quite the finished article it provided a rare glimpse into workings behind the scenes. Seeing it at this stage humanizes the show and allows a deeper connection between the audience and the performer, while Andy acknowledged that the first few nights the audience was “more of a focus group”, it was without doubt the most entertaining focus group I’ve been involved with.

Andy Zaltzman – Right Questions, Wrong Answers is on at the Town Hall until April 22nd see website for details – https://www.comedyfestival.com.au/2018/shows/andy-zaltzman