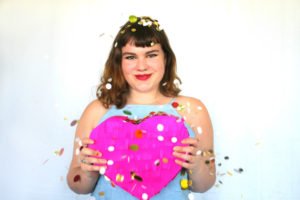 Tinder Tales: A New Australian Musical serves up a modern day story of dating in the world of easy access and endless choice. Writing duo Mattie Mcleod and Thomas Bradford combine empathetic characters, catchy tunes, and satirical lyrics to deliver this joyful musical that hits all the emotional beats of a well-conceived story.

Eadie Testro-Girasole plays the emotionally fragile and painfully self-aware protagonist, Abby, as she navigates the highs and lows of tinder dating accompanied by her cleverly portrayed insecurities and doubts. The ensemble does an exceptional job supporting the story through the choreographed dancing, the representation of Tinder and Facebook pictures, and the internal dialogue.

The songs are hilarious, using the juxtaposition between traditional love songs and the casual dating culture perpetuated by Tinder to create comedy. With punch lines weaved into the lyrics, the audience is kept on their toes, surprising themselves with unexpected laughter.

Tinder Tales: A New Australian Musical is so immediately accessible to the audience because it tells an emotionally true story of love, loss, and hope, which resonates deeply with the crowd. Laughs of recognition rose in waves from the crowd during the show, and there was universally strong verbal praise from the audience members exiting the venue afterwards. Flowers were thrown at the performers during the final bow, in a figurative “swipe right”– an exceptional show that was received with wide-open arms by an adoring audience.

Tinder Tales: A New Australian Musical was on at The MC Showroom.