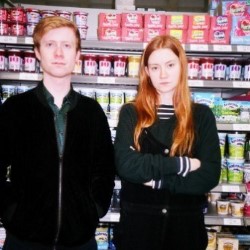 This is an hour of sketches loosely connected by the very thin thread of customers at a supermarket as seen by two security guards. The show starts with our hosts offering biscuits, crisps, tampons and pads to the audience on plates, as the crowd start filing in to the room. Once their trays of treats are empty, John Tothill and Eve Delaney introduce us to our main protagonists who discuss the strange, warped characters they encounter on a daily basis. These include a couple of hitmen, two blokes who are a little too obsessed about their teenage daughter’s level of maturity and a mother seriously embarrassed by her daughter.

The sketches are funny, well acted and well written with a little bit of swearing and some sexual references. The finale of the show is a somewhat jarring in its bloody violence but overall this is a fun hour of entertainment. This is going to sell out (from the number of people jammed in the room, I’d say it probably IS selling out) so book a ticket for a very enjoyable show. This is a pair of comedians who you are sure to be seeing on TV sometime in the near future.

Big Shop is on at Underbelly, Cowgate until August 26
https://tickets.edfringe.com/whats-on/big-shop