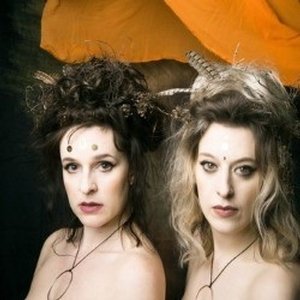 The latest show from Katie Norris and Sinead Parker is filthy. The story they share is set in the little village of Phallus Ridge and it involves the evil influence of a coven of sex witches who lure men (and women and goats) up to the Penis Cliffs and perform unspeakable acts upon them. You get the gist.

Burn The Witch is a play in three parts, with the “intervals” being filled by each of our heroines recounting the tragic break-up they had this year. Katie sings a song about hers, which is called Voodoo Pussy, while Sinead belts out “Dirty Old Slut” to underscore her tragedy. Their on-stage musician, Huge Davies, also manages to sneak in a few musical asides (and attempts to score with audience members). They play a variety of characters from the village in the telling of their tale, from the pub landlord to a school librarian and a broken-down unemployed woodchopper.

The duo are keen to get the audience involved, with a little, though not scary, audience participation. It doesn’t matter where you sit, as they are not scared to roam the audience looking for the right victim.

There was a full house for the show I saw (although some had to be dragged away from the bars, meaning we started five minutes late), and we all certainly got our money’s worth in comedy, song and dirty dancing. If you are not easily offended, this is an excellent way to round off the day’s Festivaling, with two talented yet slightly crazy ladies and a disorganised back-up musician.