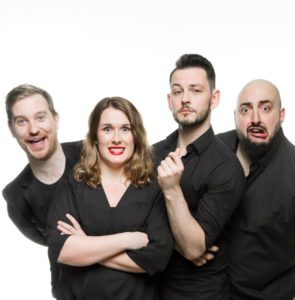 Boss Octopus are are back with a bit of an onstage line up change though previous members are still involved in the background. The performers are Will Burrage, Yianni Efstathiadis, Brit Green and Sam Hawthorne. There is a larger group working on this than those you see on stage and it shows in the excellent sketch writing. The troop formed out of University of Melbourne medical revue friends and their experience also shows in confidence, timing and stage presence.

The opening has a whiff of Aunty Donna about it with the comedy all about the rhythm of the music and the movement of the performers. It’s a lovely big musical opener and the first sketch which is simply about walking in the street is very funny which sets everything off nicely and helps the audience relax into having a good time. The sketches have different rhythms and styles which keeps the audience on their toes and they rarely outstay their welcome. There is the odd groan and some dodgy sexual carry-on type humour but all of the sketches were pretty entertaining and occasionally, actually hilarious (and I don’t bandy the word hilarious around lightly).

Generally this is a big old fashioned sketch show with the bare minimum of props and costumes and most of the sketches end with a tag, applause and a blackout or pause until the next sketch. It’s a very enjoyable, familiar style, though some work towards making the scenes change more smoothly wouldn’t go astray, especially as there were rarely any prop or costume changes to warrant a pause. A better flow of sketches would also help hide the odd weak tag (a couple of which could be dispensed with altogether), but the tech is spot on. A particular shout out for the sound queues which were superb.

Yianni can’t help but stand out for his comedy prowess, yet Will and Sam are equally as talented and all are great at comedy characters and silly voices. Brit is a new kid on the block and it shows. While others were adept at garnering laughs with a pause, a look to the audience or a nuanced phrase, she tended to shout all her lines at the back wall which does not really suit the intimacy of the Butterfly Club, but props for enthusiasm.

Boss Octopus put on a very entertaining hour of high quality, silly sketches packed full of surprises and laughs. There’s no political message here, so this is a chance to take a break from the world and just sit back and laugh at stuff.