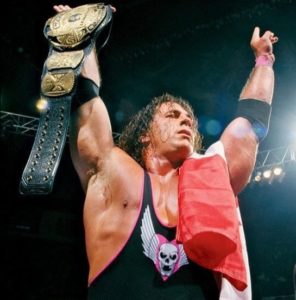 A show about professional wrestling, that’s surely enough to divide the audience there right? If you’re a fan of WWE you will enjoy it, if you aren’t you won’t – simple?

That is not at all the case with Paul Richard’s show. Yes Montreal is about wrestling, but I have seen comedians talk about marriages breaking down without ever having been married and without enjoying watching relationships fail. Explore this show with an open mind and non-wrestling fans are in for a great time.

Witnessing a knowledgeable person talk about a topic they are passionate about is a rare treat, and Montreal delivers this in spades. Paul has clearly done his homework, although I’m not sure he actually needed to do that much research as he seems to have an encyclopaedic knowledge of wrestling and wrestling history already. He tells a beautiful interpretation of the most famous wrestling story of all-time, with enough background information to bring non-wrestling fans along for the ride. He discusses the history of wrestling, its cultural impact and makes a wonderful case for why pro-wrestling is the best thing ever.

Paul’s presentation is slick and as with his superb previous show Echo Chamber at MICF 2017, he makes excellent use of technology to present key visuals and audio to accompany his stand-up. He is as accomplished as a story teller as he is a comedian, and has a rare ability to convey detailed information while keeping the atmosphere light and the laughs flowing. If you are a fan of comedy where you may actually learn something or gain understanding, this is a good one for you.

For full disclosure, I am a wrestling fan, and I would’ve quite happily watched the 2 hour directors cut of this show which Paul assures the audience is what he started with before brutal editing to bring it into 45 minutes. However my fiancée joined me to watch this, she is not a wrestling fan and she also loved it. Which as Paul pointed out to me, means that both kinds of people will love the show.

If you have even a passing interest in wrestling then it’s basically mandatory that you see this show. If you’re not a fan, but enjoy experiencing different perspectives and are interested in exploring the cultural fringe, Paul’s energy and enthusiasm will make you love this show too.