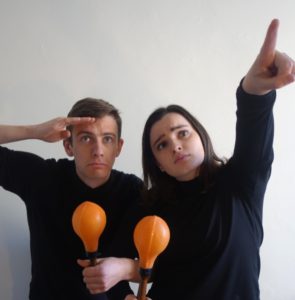 I was rather concerned in the opening moments of Where’s Jerome? With its Millennial Screech delivery and many turns of phrase attached to that generation, it was clear that this show was clearly aimed at a younger audience than I. Add in all the worst traits of drama student theatrics and I thought that I was in for quite an ordeal.

There was a point in the show where it dawned on me that something else was going on under the hood. This duo pranced around with exaggerated theatrical gestures and amusingly stilted delivery to portray inept characters that we could laugh at. They weren’t just relying on mugging to get laughs as there were actually plenty of clever ideas in this script. Amongst all the things thrown at the wall, I happened upon some that tickled my funny bone and I was soon chuckling heartily. Some personal favourite scenes were during their lampooning of various websites in the online search for their friend.

Using the theme of the missing Jerome as a linking device, this was really a random collection of scenarios that mainly poked fun at celebrity culture. Extremely pregnant pauses, rhythmic repetition and general goofiness were some of the tools in their kit. They employed lots of lo-fi props, cringe-worthy songs, half arsed mimicry and shonky puppetry to escalate the absurdity to a nose bleed level.

Alice Albon and Sam Coats are so young and perky that it was exhausting watching the pair bounce around the performance area. This duo expertly crafted a world of extreme stage artifice in which these clowns could thrive. They certainly weren’t afraid to make themselves look foolish for a laugh as Coats shoved surprising items in his mouth and both faces became smeared and messy.

A very Fringe performance, this show is a great showcase for this pair of talented comedic actors.

Where’s Jerome? is on at Errol’s & Co until September 18
https://melbournefringe.com.au/event/wheres-jerome/