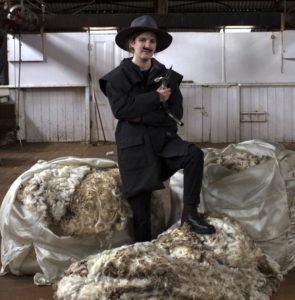 Squirrel writer Peter Newling got a peek at some of the songs from this that were performed by Kit Richards in the Lemon Showcase and he was pretty excited about them. He had a right to be, Wool! A History of Australia’s Wool Industry: The Musical is fricken Awesome.

I found Australian history as boring as bat shit back at high school, maybe because of the way it was taught, but Kit’s enthusiasm, grand songs and gentle humour really bring the world of 18th and 19th century Australia to life. This show focuses on the lives of John and Elizabeth MacArthur. Yes; he of the old $5 note and she of The Chair on Sydney Harbour. The couple who introduced the Merino sheep to Australia and began the wool industry. Kit uses hats and scarves and great comedy acting to denote characters pretty effortlessly.

Now history is messy and complicated, luckily Kit is not too fussed with the nitty gritty of it all, she’s more interested in telling a cracking tale well. This show reminded me of Drunk History, where history buffs might get annoyed at the lack of detailed research but the storytellers are passionate about their subject and don’t let the details get in the way of a good story. Meanwhile the audience has a ball laughing their arses off and learns something along the way.

The songs are lush and romantic and often quite funny with “Merino Sheep” being a standout. The songs fit together well as a score, but could possibly do with some different rhythms and tempos. She also admits that they don’t all flatter her singing voice, as she’s a bit weak in the high register, some voice tutoring should be able to sort that out. This is also a show that could possibly be performed by a group of performers, but for now it’s quite the tour de Force for writer/composer Kit Richards.

Kit is quick to point out that there are four people putting on the production: her on-stage pianist, who occasionally plays a part and sings, Kyria Webster, the very able tech person and director Lucy Rees, who’s done a great job at moving Kit around the stage so everyone gets to see her. Kit is enjoyable to watch, with great facial expressions and an endearing personality. Kit’s between song banter is also very winning, she claims to improvise it differently every night. I enjoy that she gives us some background to her songs, with some jokes and asides. Her passion for history is palpable, but she manages to convey it in a pretty relaxed manner.

This is a very dorky, sweet, comedy musical show about early Australian history that would be great to bring your teens to. Everyone will have fun and may discover a new interest in the history of Australia’s wool industry.

Wool! A History of Australia’s Wool Industry: The Musical is on at The Lithuanian Club (Son Of Loft) until September 22
https://melbournefringe.com.au/event/wool-a-history-of-australias-wool-industry-the-musical/