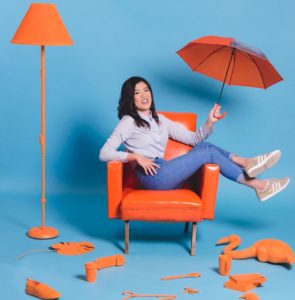 Annie Louey is annoyed at her forgetful nature, not worried enough to seek medical help but intrigued enough to create a festival show exploring memory and forgetfulness.

There’s not a lot of scientific research behind Before I Forget. Louey’s research tends to be of the Family Feud kind – asking friends and audiences about their experiences and that means; yes, us. About 10 minutes into the show Annie drags some audience members on stage and gets them to draw things from memory. I thought, gosh this is a bit early, we haven’t even really gotten to know Annie very well enough to know whether she’s trustworthy! It’s a bit of a risk on both sides, but it turns out that the vast majority of the show revolves around some genial audience participation and luckily Annie is friendly and kind to participants. She is not highly skilled at the witty banter, and doesn’t have a lot of prepared jokes, so it’s just friendly chit chat. I always think in audience participation heavy festival shows: ‘what will the performer do on the quiet night when there are only 4 people in the audience? They will have a lot of work to do!’ Hopefully Annie won’t have to find this out.

The games include; an Australian icon Pictionary (that includes drawing Annie, which doesn’t require memory because she’s right there on stage), Lost at Bingo (that strays from the memory loss theme somewhat and doesn’t seem to have a reason other than listing silly places you can lose your virginity) and, inevitably, a sort of mini Family Feud that goes on a bit too long. In between she has some amusing stories to tell about herself and people she knows. Annie is an engaging, relaxed and pleasant host with a talent for putting audience members at ease.

Towards the end Annie brings out some delightful photos from her dad’s early life and here I think should have been the heart of the show. If she works more around these and puts more into her show about the worth and beauty of memories and how we keep and store our memories and how this has changed recently, it may become a stronger show. She touches on these ideas, but I think there is a lot more humour and depth to be mined here.

It is a small space, so chances are you will be part of the show. If that’s not your bag, sit in an inaccessible spot up the back and near the wall. Before I Forget is not slick, deep or side splitting, but it’s a pleasant way to spend an hour with some nice laughs along the way.

Before I Forget is on at Lithuanian Club – Son of Loft & Arts House – Warehouse until September 29
https://melbournefringe.com.au/event/annie-louey-before-i-forget/