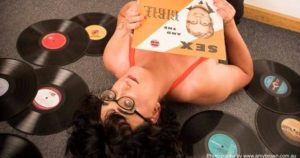 Chloe has been performing for many years and is a charming and relaxed presence on stage. She eases her audience into the show with some random gags about relatable observations such as the tininess of the performance space, (no, really, I don’t know if I’ve seen a smaller “stage” as the one at Pilgrim) and the voraciousness of Tasmanian ants before getting to the main topic of the show; her experiences in the world as a newly out transgender woman.

Transistor Sister is no angsty “Coming Out” festival show, it’s a sharing of some interesting and annoying life experiences with warmth and humour. Chloe is great at getting laughs from the dumbass ignorant behaviour of human beings but wise enough to take it in her stride and find the humour for us. There are also parenting stories, with some being pretty relatable and others being amusingly unique.

Chloe’s years in the “Poetry Scene” have taught her performance skills that are a great help in a comedy career. She’s used to creating her own performances, is very comfortable on stage and handles her own tech well. It is also indicative of her love of wordplay and she loves creating silly anagrams. There is a section of the show about her love of anagrams but I reckon they would’ve been great sprinkled throughout the show, or even used as chapter headings or to underline topics as they came and went. Chloe also has a lot of droll comments and funny stories about spoken word that will find their mark with comedy fans.

The structure of Transistor Sister could do with some tightening and tweaking. At various times she talks about coming out to family, to friends and to herself which could form the backbone of this show. Some signposts, maybe even more use of her screen, could’ve helped balance the show and kept the odd bits of repetition at bay. Otherwise, this was a really lovely show in a supportive atmosphere from a comedian who I hope to see more of in the future.