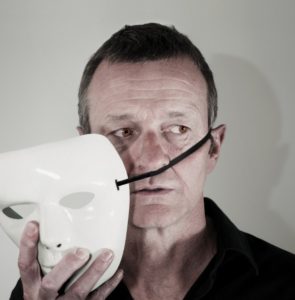 Bob Franklin – Yours Sincerely seems to be Bob Franklin’s thinly veiled criticism of a certain fellow comedian. Although Franklin plays a narcissistic version of himself, people in the know might recognise this show as a personal shot at a particular old school Australian comedian, hinting at a tumultuous relationship between them both.

Without knowing the detailed history of their relationship or the comedian in question, the audience is still able to enjoy Franklin’s work as a character piece. Franklin gleefully satirises the absurdity of this warped perspective which has his character victimising himself in bad situations that he has caused. Franklin portrays someone who is falsely taking ownership of past actions, in order to forward their own agenda. This has the impact of making the audience question the authenticity of this story of redemption that this character is trying to sell us, which we assume is Franklin’s intention.

If you’ve read memoirs by the artist that this show is satirising, it’s easy to see truth in Franklin’s critiques, making it easier to see the comedy in what Franklin is presenting. The fact that Franklin owns these as his character’s point of view only enhances this. However, there were definitely splits in the audience of people who were laughing because they understood the context behind a particular joke, versus other members who were enjoying it on a more superficial level.

Yours Sincerely represents a layered work, which audiences will enjoy on different levels according to their background knowledge of how and why this show was made. If you have very little context, you can still enjoy this as a character piece because the jokes are so well crafted, and it is brilliantly performed. If you’re better informed about the comedian in question and his history, you are able to access an additional level of appreciation for this work, but there is a frequent sense of “missing the joke” for the rest of us.

Bob Franklin – Yours Sincerely is on at Courthouse Hotel – The Jury Room.