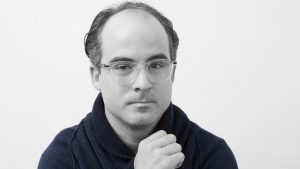 “Comedy genius” Stuart Daulman (Steve Bennett wrote it so it must be true!) presented a seminar detailing all that’s required to survive in the comedy game. If you’re expecting serious comedic writing tips you’re better off seeking the services of someone like Tim Ferguson. While he did cover stagecraft this was mostly about The Hustle, neediness and backstabbing that goes on.

This was an ambitious performance where, in true Daulman fashion, he fully committed to the concept. As lecturer he played it completely straight with plenty of business mantra chanting and constant requests for networking opportunites. The war stories got chuckles of recognition as did the familiar elements of festival shows.

Daulman’s delivery suited the piece and cleverly blurred the line of what was lighthearted joking and heart wrenching anger. A live phone call to his mum was a stilted awkward affair that was accurate rather than funny which may or may not have been the point. His descriptions of the humiliating process of ‘putting yourself out there’ and chasing a career in the arts was bleak comedy at it’s best.

Jake Ludowyke handled all AV duties using a delightfully old school overhead projector. The text shown on the slides was wonderfully excessive to give some context for those outside the industry (if you could read quickly enough that is) while having fun with Powerpoint sins. He showed many actual photos and posts from Stu’s social media as well as carefully selected quotes from show reviews (former Squirrel Elyce Phillips got a mention, umm… hooray?). Particularly adorable was the lo-fi animations using transparencies which when combined with bombastic music was hilarious. Ludowyke’s role was so much more, regularly acting as cheerleader for the audience to provoke reactions.

The finale was a demonstration of this master performer at work.  Stu ritually changed into the comedian’s uniform and ripped through a solid set that would go down well in any beer barn, but a lot of the big laughs for us are in recognising all the bad tropes covered previously. There was also the deeper understanding with the knowledge of all the shit he had gone through that provided extra layers.

This show was definitely geared towards an experienced festival audience, in particular those in the biz. This was so much more than a hilariously faux bad business seminar and laid out Stuart’s emotions bare. Stuart Daulman’s Masterclass was a powerful glimpse behind the curtain of the life of a standup comedian.

Masterclass is on at Melbourne Town Hall (Regent Room) until April 21
https://www.comedyfestival.com.au/2019/shows/masterclass