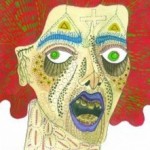 A tale of monsters, curses and revenge, high adventure, searing absurdity and deep pathos; this is what Nick Coyle presents in his new show “Me Pregnant”.

Formerly of “Simply Fancy” and “Pig Island”, groups which also spored the wonderful Claudia O’Doherty, Coyle’s credentials as an absurdist theatric are sound. He opens the show on a dark stage, only candlelight illuminating his face as he tells a poem of a Medieval village, terrorised by a monster, and of Emeline, the brave teenage girl who slew the monster. It is from this soliloquy that we get the title of the show, the words uttered by the monster moments before its death – “me pregnant”. From there we jump into the future and rejoin a now ostracised Emeline (blamed for a curse on the village) and the lost, last remaining child from the monster’s womb.

This story is thoroughly engrossing, I spent much of the show, literally, on the edge of my seat. What becomes of exiled Emeline and the lone baby monster with no name? What becomes of the ungrateful villagers ready to plot Emeline’s death? And where did the monster come from in the first place? All will be revealed.

Coyle struggles to maintain the energy in some of the complicated early scenes which set up all the character, becoming a bit stilted without a second player to work off. However once he gets into the meat of the story, switching between Emeline and the monster the transitions become a lot smoother and allow Coyle to extend his acting chops in ways which are occasionally reminiscent of “The Mighty Boosh”.

This is not a show full of gags, however there are many one liners and clever inserts along the way and Coyle contrasts modern references and language against the Medieval backdrop well. That said this is not going to be the most uproarious show this festival, the humour here is of a quieter kind. But this seems not to matter as, by the end, you will be deeply moved by this unique, modern fairytale.

If you like your comedy on the absurd side and with plenty of pathos you can’t go wrong with this show. I loved it.