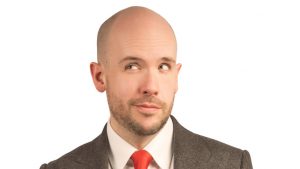 A cold, wet, windy, unwelcoming Melbourne night and a climb up the cold, unwelcoming concrete stairs to the first floor of the Greek Centre were immediately offset by a warm welcome from the main attraction himself. Tom Allen greeted every guest personally, sharply dressed in an immaculate three piece pin stripe suit complete with silk pocket hanky.

He is a recognisable character. He has appeared on a number of the British panel shows that are shown here, including Mock the Week, Live at the Apollo, 8 Out of 10 Cats Does Countdown and of course Great British Bakeoff An Extra Slice. The personal greeting upon entering allowed time for an extraordinary number of pre-show selfies to be taken at the request of adoring audience members – not something I’ve seen too often at festival shows.

His impeccable appearance and his obvious fondness for show tunes give you a fair idea of what to expect even before Allen makes it onto the stage. Tom’s comic character is camp, acerbic, bitchy, self absorbed and animated. His suit and his tongue seem to compete for sharpness. His stories are punctuated with moments of fast paced angst, high pitched excitement and wonderful under-the-breath backhanders.

Much of his material is based on growing up gay in England, and his current status as a thirty-something gay guy still living with his parents. His story lines are very much experience and relationship based – and he is a very fine story teller indeed. He manages to balance pomposity and judgementalism with delightful (very British) self deprecation.

Allen excels at audience interaction. He has a wonderful knack for drawing very funny information from a number of unsuspecting punters early in the set, then revisiting that information at appropriate moments over the course of the hour. It’s a real skill, and adds significantly to the enjoyment of the show.

Absolutely is a show that has been toured extensively, and has a confidence to it that lets the audience know they’re in safe hands. It’s great he has bought it to Melbourne.

Absolutely is on at the Greek Centre (Mykonos Room) until April 21
https://www.comedyfestival.com.au/2019/shows/tom-allen