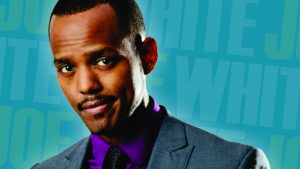 Joe White has to start every show with an Ethiopian dance. What began as a fun, charming way to kickstart his comedy routine is now a must. Once White neglected the dance, and a lady came up to him, upset: “Joe, why didn’t you do the dance?” It ruined her night.

You can see why she wasn’t thrilled about that. But it also seems a tad unreasonable to let that totally impinge on your enjoyment of White’s entire show. Because all of it is great – the dancing, the material, the back-and-forth between himself and the audience. Even before he got into the dance, White was smiling cheek-to-cheek. And that smile never disappeared over the course of his set. Seeing him, clearly, having a great time on stage rubs off on the audience: it makes you like White’s comedy, and even him as a person.

It’s always an experience, let’s say, to see a comic who deliberately tries to alienate you; to perform such grotesque or risqué jokes that you laugh, while questioning the moral fibre of the person – or the personality they’re trying to construct. There’s no such problem with White. Although his material goes to some interesting places – teaching his nephew to urinate without it getting on his face, for one – we are always on White’s side. Even when he takes to throwing unanticipated questions at us.

Comics need to be quick on their feet, but not many are able to develop interlinked, substantive material in the heat of the moment. White could; grilling a criminal lawyer in the front row for legal advice; asking two cousins who’d attended the show together when they were going to Tasmania to marry; and facilitating a “counselling session” between a couple who’d disagreed about the validity of donating money to charity workers at train stations.

White’s conclusion to the show is great as well. Pivoting to stories of his mother and family gives us unique insight into their difficulties as a refugee family, and the resilience they’ve needed to carry with them. It’s a funny yet touching note to end on. White – not his real Ethiopian name, if anyone was wondering – is going places comedically.

Watch out for him in the coming years. You won’t be disappointed.

Joe White’s Ethiopian & Still Not Hungry is playing at the Afro Hub until 20 April. Tickets are available here: