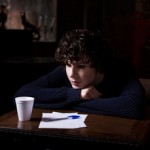 If you come to this show for the acrid comebacks and searing put downs of the “Never Mind the Buzzcocks” Amstell, you will be disappointed. This is a softer Amstell, more contemplative and vulnerable. He’s even dressed differently from how you might expect. He’s not the sharply dressed, young, hip, uber groovy Amstell of “Popworld”, but with his glasses, devil may care hairdo and loose fitting clothes, he’s almost a bit shabby. However whilst his clothes or his attitude may be not be sharp, his wit is as sharp as ever.  Like some of the great comedians, Amstell can also impart a great deal of meaning with a look or a simple gesture, something he displayed superbly as he dealt with a girl using a camera in the front row.

This was the first preview show and as one might expect there was still a bit of working out to be done. Amstell made no secret of this and used it as the source of great amusement as he made a point of noting down some of his funnier adlibs and of checking his notes with a clown like, faux slyness.

Some of the themes in this show; bemoaning a dying planet and going on a spiritual quest to find himself, seemed a little old hat. However Amstell injects enough humour and self awareness into these subjects to pull it off. This is a consistently funny and interesting show from Amstell and it only promises to get stronger as the run continues.

Simon Amstell is performing his show “Numb” at The Lower Melbourne Town Hall. Though scheduled to start @ 8:15, the show started and finished 20 mins late. However this may just have been a first night hiccough.