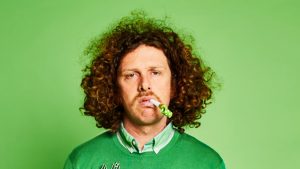 The German language has some wonderful words. Most people are familiar with the concept of schadenfreude – the pleasure that comes from the troubles, failures, or humiliation of others. Some may be familiar with backpfeifengesicht – which I believe translates to ‘a face badly in need of a fist’ or similar. I wonder if the German language has a word that describes “Audience laughing out of sympathy for the performer”. That may sound harsh – but I get the feeling that that’s exactly what Nick Capper was aiming for.

Capper doesn’t try to put himself across as anything other than a likeable doofus. This is reflected in his dress sense, his choice of hair style, his affable tone of voice and definitely in his choice of material. He seems to want people laughing at him, as much as laughing at what he says.

Capper markets himself as ‘one of the only agricultural-based comedians in Australia or the world’ – and I admit I’m struggling to name another one. There’s a video of pigs that greets the audience as you walk in. Much of his routine is based around his experiences as a country lad living in the city. I now know more than I’ve ever known before about dirt bikes, tractors, and egg conveyor belt technology.

His delivery, however, is somewhat unexpected. Yes, you’ve got the slow, dim, good natured yokelly larrikin as a base, but his bumpkin schtick is interrupted by totally unexpected moments of bizarre. A bit like Graham Chapman’s splunge moments, Capper throws in random flashes of idiocy that make you wonder ‘Did that actually happen’? Some of these interruptions are accompanied by sound/lights/video, some just vocal. They may involve martial arts. Or a song. Or a totally unrelated anecdote. It’s a difficult style to describe.

One thing for certain, it’s a really hit and miss style. On the night I was there, some of it fell dreadfully flat. Some (including the occasional tech element) didn’t work at all. Some of it was obviously padding. We know that because he told us.

The small Zeus room at the Greek Centre was about ¾ full – mostly of people known to the performer (who thought he was hilarious). I’m not exactly sure who Nick’s target audience is. This might be one of those shows that you just need to go along to find out if it’s you or not.