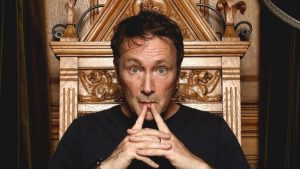 Jeff Green is one of those comedians who feel like part of the furniture, that he’s been around a long time and yes he’s been doing comedy since the 80s but he’s only been living in Australia for ten years and this show is somewhat of a celebration of the life he has made here.

This year Jeff is doing something a bit different for the Comedy Festival. It’s a concept show with a interesting structure and script. He’s going to read to us several letters he sent to his mum over the ten years since he left home in Chester in the north west of England (a little south of Liverpool). It’s a bit like pouring over an old diary and proves nostalgic for the mostly middle aged audience, also.

Ten years ago Melbourne was in the middle of a frightening drought and the rest of the world was in recession. It’s amazing how much has happened in the past ten years, to Jeff and to the world. Not all of the show is in letter form, there are a couple of videos and plenty of in between anecdotes. He sprinkles a few photos throughout the jokes and letters and I would’ve loved some more, especially at the beginning.  There are some serious moments, but Jeff is not the type to wallow in serious subjects he keeps it all pretty light and gentle.

Jeff says the letters are real, but there are so many jokes it’s hard to believe they are not somewhat embellished, or he really loves trying out his material on his mum, who doesn’t mind some ribbing. Jeff really pumps out a lot of jokes and despite starting his career as part of the alternative comedy scene his jokes are mostly of the old-school British Club style.

Jeff is very experienced at what he does and has a relaxed friendly vibe with his audience, who clearly adore him and roar with laughter throughout. If you’ve enjoyed Jeff’s work on the Gala and elsewhere, this is definitely the year to get to know him better in this show.

Jeff Green performs Letters Home at the Swiss Club til Apr 21. Except Mondays when he is at The Melbourne Town Hall.