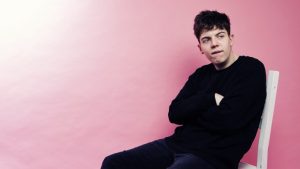 On arrival, I thought I’d gone to the wrong show, I was in the right place and the right time and the tickets matched the name on the door, but I wasn’t convinced that the 20-something year old with an asymmetric haircut was going to hit the right notes for me. Ed Night recognises that millennials are his target audience, but as quickly points out that the stereotypical millennial is a figment of our collective imagination and doesn’t actually exist.

Ed’s delivery felt very off the cuff and relaxed, clearly well written but given room to adapt and change with the audience and go to places where Night felt it needed on this occasion. It could even be perceived that the performer was nervous, and while nerves are inevitable it seemed to me that this was part of the technique and a way to challenge the audience. This challenge carried through to the content of the show, which rapidly switched between the standard fare of online dating stories one might expect from a young comedian, juxtaposed with remarkably poised and confronting realities of social media, the lack of empathy in the world and a brutal attack on a major British comedian. The more obviously funny elements paving the way for Night to show his supreme intellect in his attack on the apathy and hypocrisy of modern life.

Ed manages the room superbly; shattering supreme comedic moments with jarring statements to reintroduce tension and remind the audience he isn’t there just for dick jokes. There were elements of Stewart Lee in his occasional fixation with minute detail and his desire to introduce silence to a laughing room.

It’d be easy for a fan to dismiss this show and the comedian based on appearance or youth, as I almost did when I first arrived. It would be even easier for the performer to use his great wit to play for the cheap laughs, but Ed Night clearly wants to establish his platform to make people think, to challenge the norms and to try to make a change. While already an accomplished comedian with an ability well beyond his years Ed is a performer to watch in the future as I sense this show is the tip of the iceberg of his ability. I’d highly recommend this to anyone who is ok with their comedy dark and is comfortable seeing someone far too young achieve something far too impressive.