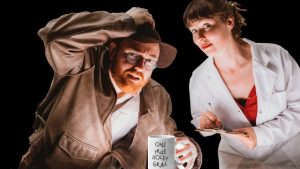 You Chose Poorly is Alanta’s third science lecture-based comedy show at MICF, first it was bugs then it was bees and now it’s dinosaurs, sorry, Bias. This year she has teamed up with fellow science nerd, comedian Ben McKenzie, who would prefer to talk about dinosaurs, but he chose to perform in this show and it is about the choices we make and the bias inherent in our systems.

This show had a great opening with a reference to Raiders of the Lost Ark but it should have begun by preparing you for the interactive 2 min on-line Quiz. The audience could be doing it as they are waiting for the show to start or at least primed with the web address on the screen so everyone can have their phones on and the webside up ready in time for the quiz portion of the show which then helps shape large parts of the rest of the show. By the time we were getting close to being ready the 2 mins for the quiz was over. Our friends did not have phones with them. Also there was no free wifi at the venue which would’ve helped. I’ve done interactive things on phones before, it can be fun but it can also be very stressful. Esp if you have a slow old phone.

This brings us to the other stressful thing about this tech heavy show, I was sitting in the 3rd row and could barely see the screen because of the nature of the space – and a couple of tall people in front of me. The slides contained a lot of very funny things but we could not see them all and sometimes they were rushed. You might have to stand up occasionally to get a good look at the screen. It’s a pity to go on about this because the show otherwise was delightful, and Alana & Ben were heaps of fun to spend an hour with.

What do all geeks have in common? They have to tell you what they are passionate about, usually in great detail, but they don’t all have the communication and comedy skills of Alanta Colley & Ben McKenzie. Although they are not really straight standup types they have both been writing comedy and creating comedy shows for some time. I really enjoyed the dynamic between them, Ben was the naughty geek boy wanting to talk about dinosaurs, D&D and superheroes while Alanta kept the show on the rails, bringing it back to finding funny in the science and stats with an occasional political gag on the side. Although this is a show about psychology, science and statistics it is far from dry. Alanta and Ben make sure the laughs keep coming and have a charmingly funny finale.

This is having a short run so get on down to Campari House in Hardware Lane and get your geek on. You will have chosen wisely.