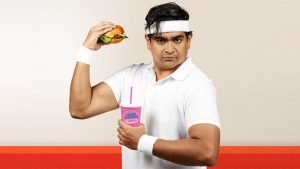 The first thing I notice when Dilruk Jayasinha comes out on stage is OMG he looks ½ the man he was when I saw last years MICF show! It’s pretty impressive. He made a bet with a mate, comedian Ben Lomas, to see who could get to under 100 kilos first and this show is about the journey Dil’s been on since.

If you’ve come hoping for diet tips, this is not the show. Dilruk does not break down how he changed his diet in any great detail or what he considers healthy eating to be. Dil is unpacking all the things that led to him being overweight and the emotional roadblocks along the way. His first port of call when losing weight was not a weightloss company, but therapy and the show feels a bit like an extension of getting all of that out, but in a way that comedians do, through comedy.

Dilruk brings his big eccentric family into the show, as he always does, here with memories of food, such as when Grandma would slip him treats with “Don’t tell your Mum” (with my Nana it was Scottish caramels slipped under my pillow, with Dil it was bowls of fried chicken fat). There was also childhood bullying to endure, and Dil learnt to turn it around, so they were laughing with, rather than at, him which is often the case with budding comedians.

As well as performing his show Dilruk deals with some audience disruption beautifully, stopping the show, finding out the names of all involved and making it part of the show. Thankfully it paid off beautifully and the crowd went wild. These things help make the audience feel like they came on a special night, and it was.

Dil is one of the comedians I’ve seen right through from nervous beginnings to that night when I see a comedian commanding a large room and think, “That’s it – They are There”. Dilruk is definitely one of the top standup comedians in the country right now and this is the best festival show I’ve seen him do.

To learn more about Dilruk’s journey you can listen to the podcast he made with his weightloss  buddy. Fitbet.

Dilruk Jayasinha Cheat Day(s) is on at the Victoria Hotel til April 21 for more info check the MICF website: