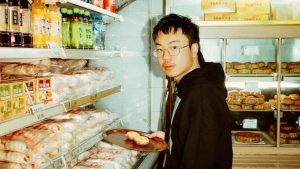 Aaron Chen has been getting a bit of buzz around the festival this year. So much so that he put on extra shows in a bigger room at the Greek Centre. It was a good thing – a sold out early show on a Saturday could bear witness to the awesomeness of Chen and have a great time.

Beefcake portraits of Chen graced the stage and bombastic music played as we entered. The sheen of this impressive display wore off upon discovering the identity of the artist responsible for the art and when he began this rather low energy performance.

The show had the overall theme of success, fame and problems that come with it ,although his random selection of observational jokes didn’t seem to fit. The highlight was his serialised story “Crazy Rich Aaron” which hilariously chronicled the rise, fall and rise again of a billionaire called Aaron.

The delivery was a rambling affair that resembled a rookie open-micer so closely that it betrayed his years of experience. He went off on various asides and included plenty of slightly awkward audience banter. A number of jokes missed the bullseye but he regularly got big laughs while reflecting on their failure. He made humorous threats to us as if gaps in our knowledge were hampering, nay ruining, his show. I must say he is more than willing to go all in for a rather lame joke as demonstrated by a slightly uncomfortable visual gag.

On the surface this seemed like a potential car crash but clever lines emerged, his epic tale called back most of his previous jokes and he carried out his threats, proving that everything was carefully planned from the start. Even the crowd work was woven seamlessly into the overall narrative. Aaron certainly played us all.

Aaron Chen has a brilliant stage persona that is one of a kind. A strange mix of uber bravado and lovable loser, he is a beautiful contradiction. He presented a chatty hour of comedy with enough twists to reveal the comedic mastermind underneath the fragile shell.

piss off (just kidding) is on at the Melbourne Town Hall or The Greek Centre until April 21
https://www.comedyfestival.com.au/2019/shows/aaron-chen-piss-off-just-kidding