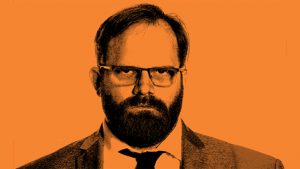 Greg Larsen wants you to know that he’s never abducted any kids. Not once. And he doesn’t have any intention to, either.

This, coupled with the fact in his earlier days he stuck “The Iraq War” stickers to stop signs (thereby reading “Stop the Iraq War”), clearly elevates Larsen to the status of a modern-day saint. But there are other qualities that Larsen possesses that compromise such a title. For one, he’s been known to eat a litre tub of custard in one go, an act that caused his partner to break into uncontrollable tears.

Larsen’s jokes aren’t unexpectedly ground-breaking or original, but they are tried and tested; and most importantly of all, reliably funny. This show, primarily about Larsen’s political beliefs and his volatile involvement in such causes, covers surprisingly vast material, from the pitfalls of democracy – which is illustrated with startling, hilarious effect (note: Red Dog 2 plays a central role in forming Larsen’s belief on this) – to the problems of communism, to the commercialisation of left-wing values.

All carry decent political insight, though these are outstripped by the laughs Larsen conjures. His ability to get long-lasting, deep-from-within laughs was exceptional. Some occasional jokes that didn’t “hit” were more than compensated for by the ones that landed just right.

As Larsen says, we’ve probably only got a few good years left before environmental catastrophe forever changes the world for the worst. In the meantime, it seems only logical to partake in some good comedy that makes us forget that reality. Larsen’s is hardly a bad place to start.