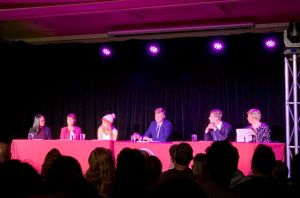 As well as his normal political type stand up show that Tom Ballard is known for, this year Tom has written a satirical play. And it is not at all about The ABC TV show Q&A. No Not At All.

We are the audience in a TV studio on a Monday night, there is an applause sign and some audience members are given questions to ask by a roving man with a mic, so you or someone you know might end up being part of the show. Tom Ballard plays the host Tony Jones, and joining him on the panel are five guests; Michelle Brasier plays millennial, hipster singer Meridith, Ra Chapman is statistician Susan Minh , Geraldine Hickey plays ex extreme right wing party /current independent Leonie, Patrick Livesey the Liberal politician Michael Lawson and Emily Taheny played Labor politician Katie. (I’m not sure who the chap was with the mic – he later pulls out a guitar and supports Michelle Brasier with her hilarious singing. This is one of those group MICF shows that I wish had programmes for the audience).

Tom Ballard, once actually hosted Q&A, so he knows his subject and creates a very credible vibe, but his comedy voice does not always sound authentic coming out of the mouths of some of the performers. It is clear that the performers who get the most laughs have the most comedy experience. The stand out is Geraldine Hickey who is proving to be a brilliant comedic actress, her timing is just awesome and character pitch perfect. She plays it totally straight and yet is able to get huge laughs every time she interjects. I wish somebody would make a movie where Geraldine could be hilarious.

#KWANDA: A Play is, no doubt, a great Catharsis for people who yell at the TV each week while watching Q&A but continue to watch Q&A. I got sick of watching it years ago and this, unfortunately, reminds me of everything I dislike about it, it’s just a bit too close to reality, which admittedly is becoming almost too insane to satirise. Everything that happens in the play has pretty much happened in real life except that this time the host gets to have a tantrum as well. Maybe this play needs more comedy wigs and silliness & less shouting recriminations, to make it more pleasurable to watch than the real thing, a bit more removed from reality, like, dare I say, Mad As Hell.

I can’t help but feel that Tom has written this to let out all his frustrations of the past year and in some ways we can all relate to that! I’m always happy that the Melbourne International Comedy Festival has space for these sorts of bold experiments in comedy theatre. There were audience members around me having a fabulous time and I certainly laughed quite a lot, if mostly at Geraldine Hickey.

#KWANDA: A Play is playing at The Lower Melbourne Town Hall