Guy Montgomery will admit that he 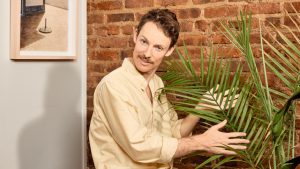 Montgomery nimbly leaps from idea to idea, elegantly vacillating between serious and humourous in a heartbeat. Any time the mood drops, he brings it back up with a well-timed joke. He takes on the biggest and most fraught issues and gets away with it because he does it breathtakingly well and is incredibly likable. His genuine vulnerability and the fact the show comes from personal experience prevents it from becoming a self-aggrandizing rant. It feels honest and is so perfectly written. Montgomery is quick, clever and absurdly funny. He appears to go off on tangents, but it always returns to the heart of the show. It’s a tangled, layered maze of jokes and truth, or the combination of both.

By being vulnerable, Montgomery inspires us to be too and I was shocked by how honest the audience was. At the end, he stands at the door and hands out bits of paper, written on by other members of the audience at the beginning (whoever wrote the one I got, I want to hug you). It’s a chance for self-reflection. We’ve all done things we aren’t proud of, and Montgomery tells us some of his, honestly and bluntly.

This show could be dark or heavy, but somehow isn’t at all. The audience walked out smiling and laughing. It feels like a show of absolution, where we can all acknowledge our past misdeeds, then grow from them. While that might not sound like a barrel of laughs, it is liberating and peppered with more than enough laughs not to turn the hour into an over-extended TED talk.

It’s a rare gift to be able to write a show so serious and yet so uplifting. But Montgomery is talented and pulls it off without a hitch. It would be a shame to miss it.

I Was Part Of The Problem Before We Were Talking About It is on at Mantra on Russell.