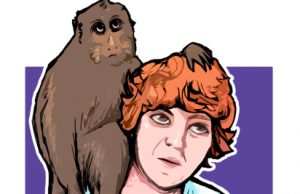 Don’t be fooled. The pizza place facing Swanston Street, flanked by a 7-11 and a Chinese acupuncture facility, is really just a front for an upstairs bar which, on special occasions, becomes a comedy venue.

Matt Harvey is a Melbourne based comic who has spent considerable time touring around Australian fringe and comedy festivals. He has bought this, his current show to the MICF for a limited season.

He’s upfront about the style of his show. Right from the outset, he declares himself to be more of a story-teller than a stand-up, and to be prepared for intermittent laughs – that he’s not aiming for laugh-a-minute patter. This is an accurate description. It’s not roll-around-on-the-floor-holding-your-ribs kinda stuff.

Matt’s show is intimate and warm. It’s rather like listening to a friend telling you stories about their recent travels, than any conscious effort to reel off gratuitous gags.

The show’s blurb reads: “Five true stories – a monkey, a bus trip, a fire, an arrest and a mugging”. And that too is an accurate description. He makes no attempt to dictate to his audience any expectation of what the common themes are, or the life messages he’s trying to illustrate through his stories. Instead, he leaves that up to the listener.

The stories are an exploration of his reactions at the times in his life when he’s been most powerless, and most alone. There’s a common theme of super heroes running through the commentary – while the stories paint a less than heroic self depiction. It’s a collection of dumb decisions in times of stress.

This show is not going to be everyone’s cup of tea. There’s nothing big or flashy about it. There’s no attempt to offend or be controversial – nor is there overt political content. There’s no silliness or wackiness about the delivery. The gag-per-minute ratio is not a focus. It’s pure story telling – told with warmth and sincerity.