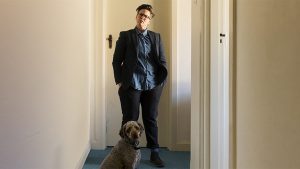 When I last saw Hannah live it was at a very early version of her multi-award winning Nanette that has since made her world famous. At the time she seemed pretty serious about quitting the comedy world and going home to Tassie. It certainly ended up being a closed door on a big chapter of her life but it also opened a big window and she is now living new life as the toast of the town in LA instead.

The show itself, which was about empowering the marginalised, vanquished most people who saw it. It spoke to our souls. The name Nanette has become a signifier; you might hear someone say: the comedian I saw is “doing a Nanette” and I’ve met people who think Hannah’s name is Nanette, but bizarrely, Netflix chose to cut the story about how the show got its name. It seemed so insignificant in amongst the weighty subject matter of the show. But names are important and the name of this year’s show Douglas, comes from a comical mix up that misleads in its significance to the whole of Hannah’s show this year, which is all about the importance of names and who holds the power to name things; Every Thing.

Douglas is a big F U to the idiots who said Hannah’s not a standup comedian. She’s hilarious throughout and her work is closer to the zeitgeist than most of the standups around town bragging about their tinder issues. At the same time she’s proudly performing her own style of comedy show. There is art and passion and feminism. She is awesome and the audience loves it. To top it off, Hannah’s innate sense of showbiz has always given us fantastic show finales and this was glorious – the crowd went wild.

To have fellow Barry Award winner Zoe Combes Marr as her warm up act is like having the Rolling Stones warm up for the Beatles. Zoe performed a big chunk of Bossy Bottom with huge rapid fire energy and was on top form. Quite a contrast to Hannah’s often lo-fi style, but an excellent warmup. Then when they appeared on stage at the end for the joyful encore, together, you can see two friends having a great time together. Touring Standup can be a lonely life, how great to be able to hang out with your mate, performing such excellent work.

There was no second album syndrome about this, because Hannah has been perfecting her standup over twelve years since winning RAW Comedy in 2006. At the launch of the Melbourne International Comedy Festival this year, Hannah talked about how the Festival nurtured her career. It’s been an honour watching her develop as a performer from small hot rooms to filling Hamer Hall and it’s a joy to see everyone adoring her work as I’ve always done.

If you could not get a ticket during April in Melbourne, Hannah will be touring the world and back in Australia later this year…. hopefully.