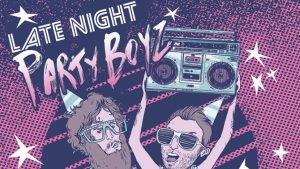 The Late Night Party Boyz (Ross Purdy and Damien Vosk) bill themselves as absurdist sketch which is not far off the mark. In this not so late show they throw everything at the wall, some of it sticks while the rest leaves you scratching you head. Their high energy performance ensures you won’t be bored.

The advertised theme of rebellion kinda fit this collection of sketches that went in all sorts of surprising directions. Scenes regularly overshot their natural conclusions just so they could club us over the head with some social commentary even though this was repeating what we had already seen in the body of the sketch. There was plenty of cartoon violence complete with wacky sound effects and grotesque characters to chuckle at. Video segments with comically underwhelming punchlines were very repetitive, which was by design but not a joy to sit through.

Things regularly got meta with sketches discussing the scenes we had just witnessed. Offhand comments and rants about the tropes and shortcomings of sketch shows were a none too subtle wink to the audience combined with a slap to the face.

Audience participation varied from being warm bodies for them to project back-stories onto through to somewhat embarrassing situations usually involving foodstuffs. The “Mr Ice cream” sketch was fascinating to witness as it was so creepy from the outset that absolutely everyone was reluctant to play along. It’s a good thing they had some amusing patter and an additional character to throw on stage to fill in the very long time before the action could proceeded.

Purdy and Vosk played everything big and bold, bringing this cavalcade of weirdos to life. They certainly weren’t afraid of looking foolish for the sake of a laugh and we readily giggled at the degrading things they did to one another. The debris left on the stage at the end was an apt reminder of how the duo had given their all to entertain.

If you like it freaky, messy and too clever for it’s own good, you’ll have a grand time at this hour of lunacy.

Rebel Without Applause is on at The Tickle Pit at The Croft Intitute until April 20
https://www.comedyfestival.com.au/2019/shows/rebel-without-applause