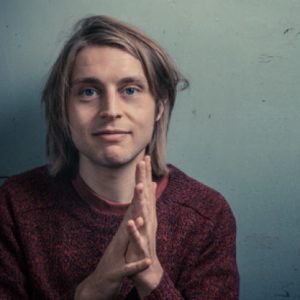 It’s really later, after you’ve spent an hour laughing with this joyful, adorable comedian and you leave and think about it, that you realise how seriously dark the undercurrent of this show is. Tom Skelton is telling the story of how he was diagnosed with a disease that took most of his eyesight at a very young age.

Tom is perky and playful, more of a whacky character performer than a stand-up comedian, though he is an entertaining story teller and he has some interesting stories to tell. We learn a lot about some Inspiring VIPs (Visually Impaired People) from history and legend, such as a 12th Century King of Hungary, Bella the Blind and learn how Sampson was blinded. He also sings a song about Louis Brailles over the top of a song by Jacques Brel. The coat rack on stage holds a lot of colourful costumes for his characters and it’s hard to tell if Tom is playing up his difficulty in donning costumes or having genuine issues, but he encourages the audience to laugh at his entanglements. He’s a comedian, he’s happy to get the laughs wherever he can and wants to make sure we don’t feel guilty or the need to be polite.

When he’s not doing his solo shows Tom works with the improvising group Racing Minds, so it’s not so surprising that it’s a bit loose and there is quite a bit of audience participation. The two chairs on stage are a hint. He begins by casting the entire audience as medical students learning about his condition. Quite a few people are dragged up on stage throughout the show. It’s not always easy, but how could anyone turn down his blind puppy dog eyes?

Blind Man’s Bluff has many puns and groaners and feels just a bit too loose at times. The sound was often too loud, which may be a bonus for the hearing impaired, or possibly a glitch on the night I saw it. He did describe a lot of his actions and surprising amount of visual comedy which was handy for visually impaired comedy goers and he often made these amusing and occasionally obviously ironic.

Tom is not slick, but he is full of energy and enthusiasm, he works hard to give his audience a delightful time while also giving us an insight into his personal experience without getting too melancholy. Check him out while he’s still in the country.

Tom Skelton Blind Man’s Bluff is on at Imperial Hotel