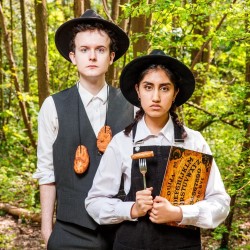 The venue for Children of the Quorn™ is huge. It’s a nightclub floor with seating for around 200 people. There is also a functioning bar at the back of the room. I was impressed at how full it was when the show started, as I thought they may have been a little ambitious for a relatively unknown duo in an afternoon show. Fortunately, Andrew and Ambika rewarded our confidence in them.

Ambika Mod and Andrew Shires perform a series of sketches, in which they play with time and reality, often tricking the audience in subtle and unusual ways. The premise of the show is that they are performing the sketches while waiting for a bell to ring at the side of the stage, which means they have made contact with the spirit world and can start the seance. Some of the sketches deliberately stretch the joke almost to breaking point and they regularly get away with it. I, being a big Tolkien fan, enjoyed the Gollum sketches most of all. The audience were loud and boisterous, both in their enjoyment of the show and partly through their use of the bar.

Smartly written, superbly performed and very entertaining, this surreal, crazy and hilarious show delighted the crowd. I expect they probably will be filling out that massive venue once word gets out about the show.

Children of the Quorn™ is on at Just the Tonic at La Belle Angele until August 25
https://tickets.edfringe.com/whats-on/children-of-the-quorn