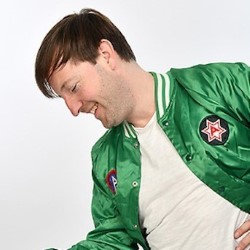 Andrew Maxwell is performing his twenty fifth year at the Fringe. For those who don’t know, Andrew is from Ireland, his wife is a Muslim and they have chosen to live in a Brexit voting area of Kent. One of his other jobs is as a voice over man, most notably for the reality TV show Ex On The Beach, which he describes as a downmarket version of Love Island.

Andrew has very strong views on Brexit and the people who voted for it. And, just to save time, I and pretty much everyone in the venue agreed with those views. Actually, I’m not sure that the Edinburgh Fringe is somewhere that a Brexit voter would even consider visiting, what with all that tolerance, multiculturalism and friendly bonhommie on display.

Andrew talks about the Brexit vote and his numerous discussions around the country (he recently did a long series of gigs in small (Brexit-voting) market towns about the subject), and he demonstrates the main arguments for Brexit that have been put forth by its supporters. They are as detailed and cogent as you would expect from people who think Boris Johnson is their saviour.

Apart from Brexit, Andrew talks about his family and the jolly problems they have going through airport security, his 18 year old son’s attempts at rebellion, and his first experience of the pebbly beaches of south east England. All of this was delivered in a very scratchy voice, as he appears to have broken his vocal cords by day five. I recommend booking to see this as soon as possible, especially if you are not a fan of Brexit. Very funny hour of comedy and you will definitely learn something from his chat.

All Talk is on at Underbelly, George Square until August 25
https://tickets.edfringe.com/whats-on/andrew-maxwell-all-talk